The following individuals hold special distinction as Honorary Life Members of the BCHF: 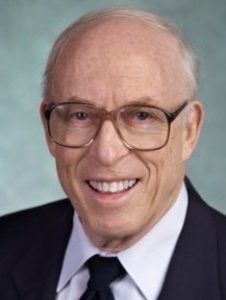 Victoria resident Ronald Greene was a member of the BCHF Executive from 1998 to 2015 — a 16-year term that saw him serve as Treasurer, Vice-President, President and Past President. Ron is also a long-time proofreader of British Columbia History, and has contributed many articles to the Federation’s flagship publication.

He is a fellow of the Royal Canadian Numismatic Association, in which he provides a BC perspective.

Ron’s peers describe him as a strong advocate for BC history – the kind of person who can keep things moving, even when conditions conspire otherwise. He has been a tireless fundraiser for the BC Archives, and the organizer of countless workshops, symposia, conferences and special events that have connected people and expertise over a wide range of topics, from historical coins to the founding of Fort Victoria.

Ron’s appointment to this special distinction marks the revival of the BCHF Honorary Member Program after several years of dormancy. 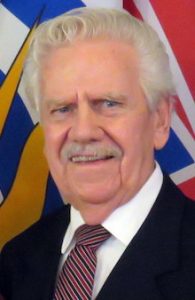 In 2003, Ron started the Federation newsletter, thus introducing a crucial vehicle for internal communications among members.

Ron edited the newsletter for a decade, single-handedly producing 42 issues at up to eight pages and 550 copies each as he moved from a monthly to a quarterly publication schedule. Ron has a keen eye for historically relevant news items, and his bursting file of news clippings continues to provide fodder for our magazine, newsletter and web teams.

Ron was also instrumental in  increasing Federation membership. When he took on the role of Membership Chair in 2002, the Federation consisted of only 37 members. Ron worked tirelessly and with a very personal touch to invite societies and individuals across the province into the fold, to introduce membership categories for Corporations and Affiliates, and to forge our very successful partnership with insurance provider Johnson Inc. By 2017, the Federation comprised almost 400 members.

Ron has been the face of the Federation to many of our members for many years. Always welcoming and always good-humoured, Ron continues to act as a champion for all of us. 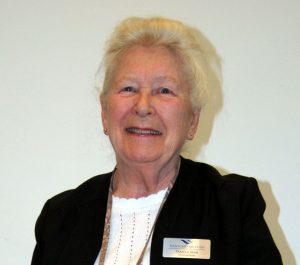 A founding member of the Federation, Pamela Mar took on the role of Awards Chair in 1988. She administered the Historical Writing Competition book prizes until 1995, implementing a set of rules and procedures to better guide judges and ensure fairness and consistency in the nomination and selection processes. Pamela actively promoted the prize around the province. One year, her committee received over 50 book nominations.

Pamela’s peers describe her as highly organized, unflappable, always ready to help, the first volunteer to arrive and the last to leave.

“She was a force to be reckoned with,” one acquaintance said, “yet she also had a distinguished presence, with her blond hair swept back in an elegant bun.”

Another said, “No matter how rough the sea got, you always knew that Pamela Mar could guide the ship in safely.” 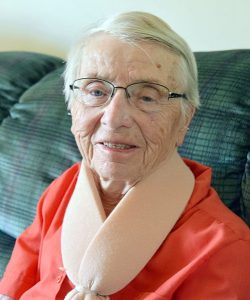 In 1988, Naomi took over as editor of the magazine’s predecessor journal, the British Columbia Historical News. She spent the next 10 years catapulting the journal into a robust publication with province-wide representation.

Naomi doubled the number of pages in the journal from 24 to 48 — postage by weight was the same for both, she says, so why not. Undaunted by the scale of filling all that extra space, she solicited stories from people all over the province. “Every time I heard of a new project or place being rededicated,” she says, “I’d put out a letter. I made a very determined effort to cover all of BC.”

Naomi engaged her husband Peter as a meticulous proofreader, and organized the hand labelling and packaging of 1,200 copies per quarter from her living room in Wasa.

Ever a doer, Naomi also drafted the original concept for the Historical Writing Competition book prize award, then chaired the first award committee until 1987.

Naomi has been a true powerhouse within the Federation, charting courses that we continue to follow to this day. 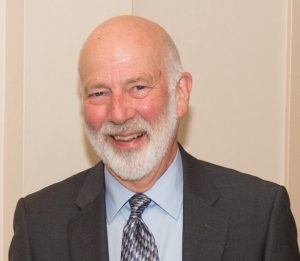 Nelson resident Ron Welwood attended the 1990 BCHF Annual Conference in Grand Forks and, he says, had the temerity to suggest that Nelson host the conference in 1997. No sooner had he spoken those words than he was recruited to Council by an astute Naomi Miller.

Ron served on Council from 1991 to 2003, working his way up through the ranks to president.

He was instrumental in moving the Federation to a web-based era. In 1999, he convinced Selkirk College to host the Federation’s first web site, then went on to serve as web editor from 2004 to 2015. Much of the content Ron developed still forms the foundations of today’s web site.

Ron is a two-time Anne and Philip Yandle Award winner, and he continues to contribute to both the magazine and the web site. He also made more than good on his original promise: he organized the Federation’s 1997 conference in Nelson — then chaperoned a second in 2009.