A group on Vancouver Island is planning to create a new monument to Nelson’s Lt. Robert Hampton Gray in time for the 75th anniversary of his death in battle.

Gray was killed on Aug. 9, 1945 when his plane was shot down in Japan while leading an attack on naval ships. He was posthumously awarded the Victoria Cross, making him the most highly decorated member of the Canadian Navy during the Second World War and the only pilot from B.C. to receive the honour.

Read more in the Nelson Star. 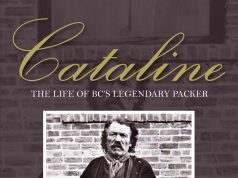