The summer issue of British Columbia History magazine is guest edited by John MacFarlane, director of the Nauticapedia project and curator emeritus of the Maritime Museum of British Columbia. So it is very much about all things to do with boats, but as John points out in his contribution entitled Navigating Our Heritage, nautical heritage goes well beyond tugboats, ocean liners, and sailing ships on salt water.

Also in this issue: Family Tales from the Graveyard of the Pacific by Rick James; Pillars of the BC Parks Branch, by Bill Merilees and Jim Anderson; the HBC Brigade Trail by Keith Akenhead; Strathcona Provincial Park by Catherine Marie Gilbert; the Armstrongs of Bouchie Lake, by Heloise Dixon-Warren; “Displeasurecraft”: Hunter and Enmity on the SS Yosemite, by Trevor Williams; and Zuckerberg Island by Ron Verzuh. Plus regular columnist Mark Forsythe looks at what the Nanaimo Museum has been doing during the pandemic, Jenn Ashton considers conflicts between history and modern beliefs, and Louise Price introduces us to the Mennonite Historical Society of BC.

The issue will be available digitally through Zinio on May 26, and copies will be in the mail in early June. To subscribe digitially or in print, go to https://www.bchistory.ca/subscribe. 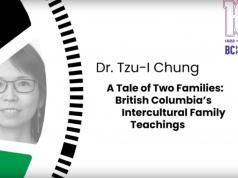 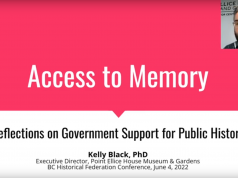